I came across this trailer for the upcoming film Death of a President, which tells the story of the fictional assassination of the president Bush. I have learned quite a bit this year about my beliefs, be them about politics or about faith. I have learned that if I fundamentally disagree with a fictional account about how the second century church fabricated what we know today about Christianity I will be told "It's only Fiction!" This film tells me that, apparently, it is ok to take any current political figure and create a snuff film about their assassination. It is abhorrent to me, but possibly it is pure candy to others who so viciously hate a man they have never met. But remember, say it with me, "It's only Fiction!"

Censorship is not the answer. It should not have to be. There was a time when a film about the assassination of a standing president would be unacceptable. When I was in the Air Force, I believed that I could tell my superiors anything as long as I proceeded it with "With All Due Respect." Turns out, you can't. And in the same vein, just because you tell me it's fiction, does not mean I have to find it acceptable.

Boy, talk about the night you did not know was coming. After mowing the front lawn (oh, btw...the grass project is coming along great), I went up to take a shower. Megan and Cindy had left to go shopping, and Katie was downstairs. I was leaning over to pull my T-shirt off and started to straighten up. I must have done it too quickly because my arms was still pulling the shirt off as my head was coming up. Let's just say that the pain was intense. Three and a half hours later I am home from the hospital. It doesn't look like a pinched nerve, but a whole lot of muscle spasm going on. Either way, the medication is taking the edge off.

Like any good football game, our 20th high school reunion had it's tailgate party at the abode of Mr. and Mrs. Nicholson. I couldn't believe how many of us were able to attend: George, Alan, Rick, Jay, Chris, Todd and Robert. I really regret that I did not bring Cindy along with me. As part of her birthday presents, I took the kids with me to South Carolina and gave her a weekend off. But I missed sharing this part of my past with her. These guys were an important part of my life, and they stood beside when my sister died. We participated together in all night movie marathons, bad cigars and acts of teenage goofiness, lovingly referred to as ploys. It seems that the only thing that has really changed in the past twenty years is our age: we are basically the same personalities. I enjoyed meeting the guys' wives; I think everyone would have enjoyed meeting Cindy. Next time. Each one of us has, apparently, married way out of our league.

The main event, held at the Columbia Convention Center, was very well put together. Kudos to Mindy, Jeff and anyone else who was responsible for bringing it all together. My only suggestion for next time: pre-printed name tags - with the ladies' maiden name printed first (as that is how we knew them). As the night went on, I felt awkward trying to read names, because I had a real hard time recalling faces. But once I was able to connect the two together, they were transformed back twenty years, and memories of classes taken together came back. 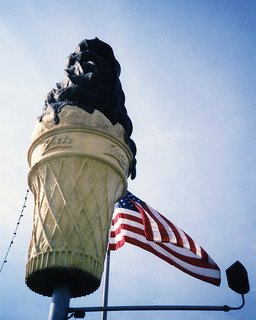 If you have lived in West Columbia, or in neighboring communities, you know all about Zestos in Triangle City. Today, I had the joy of passing it along to Katie and Megan. I enjoyed my chicken, and they had their hot dogs and, of course, ice cream cone. I had not been inside Zestos since I left Columbia in 1992, and it instantly brought back memories of high school. Sorta appropriate, as I am in Columbia today for my 20th High School reunion. Prior to the "official" gathering, many of my pals will be getting together for a social hour. This is going to be a blast.
Posted by Chuck at 3:59 PM 1 comment:

Katie, my nine year old, is absolutely in love with horses. She has been taking riding lessons, and, besides video games, this is something that she is serious about. When she started, I could not tell you the differences between a trot, a canter or a gallop, but I have come to appreciate the communication that goes on between horse and rider to switch into these different gears. Yesterday, Katie cantered for the first time. It was a big moment because the canter is the fastest gait that she has ridden. Her foot came out of the stirrup when she transitioned back to the trot, and she slid out of the saddle, but she landed on both feet. She gave a big hi-five and a smile to her trainer, Ms. Sara Lee. Way to go, Idaho!

"I don't think we need to settle for being a mediocre bunch, although at times we look like that -- most of the time really." Steve Spurrier

Coach Spurrier made this comment about his University of South Carolina Gamecocks, but something about it rung true for me. Isn't it easy to settle for mediocrity? Being mediocre is a safe place to just cruise along and not necessarily get worse, but also not get any better. I can see, in my life, how I often settle for being mediocre in my job, with my family and with my God. Perhaps the effort to remain mediocre is just more appealing than the effort of going the extra mile. It definitely is easier to remain the same rather than change. Maybe I am just getting older?

I've had a couple of months in which I did not have really too much to talk about, so, I basically have passed on clips that I have found elsewhere. It was geared more towards the "loafing" side, but definitely not very creative. Rick has posted an excellent post on voting over at Good Coffee. Frustrated with the current state of politics, he is going to make a stand a simply vote blank at the polls. The best line is in his follow up post is that the politicians are telling us "what I want to hear" instead of "what you want to say."

Here are two observations about the state of elections

1. You gotta pick a Team: In America, nothing gets someone fired up like rooting for a team. And in politics, for all practical purposes, we have two teams. How do you know which team you should be on? Well, you have to determine if you are a liberal or a conservative: those labels describe the two ends of the scale, and if you really want to root for your team, you have to be on your team's side. It is, after all "Us versus Them."

Life tends to get busy, and many of us (hand is raised here) do not have much inclination to research the person who we end up voting for. But, here is what I am going to do.


No one will fulfill all of your list. The people running are prone to mistakes, just like we are. But hopefully, there is someone who best represents your personal goals. Look for that person.