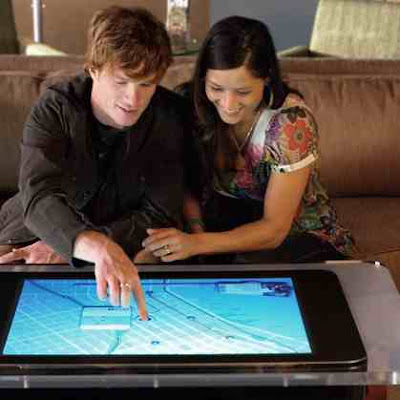 Coming soon to your living room. Check out the three videos here for an overview of Microsoft's Surface.
Posted by Chuck at 6:27 AM No comments:

15 years ago this past Sunday, Cindy and I got married for the first time. Yes, we have been married twice.

I first met Cindy in the winter of 1987 when I changed majors from Physics to Music Education. She was sitting in the back row of Dr. Phillip's history class wearing on of those white pantsuits so popular in the eighties. Since I had not seen her in marching band, I quickly figured out she was either voice or strings. She was a violinist. She also turned about to be a pretty nice person, and soon I had a new friend.

We remained friends until 1990. I remember running into her as she was leaving McMaster, and there was, no lie, just something different about her. Almost like I was seeing her for the first time. We went out that night for, what was to become a tradition, Buffalo Chicken Wings. We dated until August of 1991 when I, with the help of David and Jay, pulled off the best wedding proposal ever.

I was meeting Cindy at Sidney Park for a walk. As we came down one series of steps, Jay was standing at the bottom, dressed in suit and tie. "Table for two? Please follow me." We follow Jay down to the bottom of the waterfall where a small table for two was arranged. Dave came over with two glasses and a bottle of champagne.

These two had been setting this whole thing up in Sidney Park, and had drawn the attraction of many people (including a Cop). Quite the crowd was remaining up at the waterfall level to see what the outcome was going to be. David pops the cork, pours the bubbly, and then brings the covered ring. I go on one knee, and before God and everyone in that park, ask Cindy to marry me. She says yes. Everyone cheered and applauded.

So, last Sunday was fifteen years since we were married the first time. The Air Force has a rule against counting your fiancée as a dependent. Since I was being sent to Okinawa one week after our planned wedding, we decided to go ahead to the Panama City Beach Courthouse and get married by the Justice of the Peace.
Posted by Chuck at 6:28 AM 2 comments:

I was a geek before Star Wars, but, George Lucas firmly cemented me into that category with his 1977 adventure film. I was in fourth grade that year and can vividly remember seeing a condensed version at Shajey's Pizza Parlor. It felt like a long time before my sister and I sat down to watch the epic at the original Irwin Fuller Theaters at Dutch Square. I am sure that it did not affect her in the same way. This was the version that did not have the "Episode IV" moniker, Han shot first and I still swear that Biggs came up to Luke before the Battle of Yavin.

I want to thank Evelyn at Chase for making the cancellation of my Amazon Chase Card so easy. Since starting my baby steps to financial freedom, I have not used the card since November. The only problem that I have since had was being refused a game rental at Blockbuster Video: they would not take my Visa Check Card as insurance that I will return there game. Instead, I traded in a few older games and got the game I was going to rent for free. I have had the card completely paid off since February.

I have completed the first two baby steps and am well into the third. The fully funded emergency fund may take me another year. But, that was always my "credit card" belief...that I needed it for emergencies. Now, I have cold hard cash for emergencies and can depend on that rather than Chase (who does not have my best interest in mind).

When we talk about financial stewardship in church, we are reminded that "it all belongs to God anyways." But we are quickly reminded that "God does not need our money." Followed with "God loves a cheerful giver." Follow the line of thinking and I sometimes feel that I am in the middle of a Mafia movie where the boys are using euphemisms for rubbing somebody out. Stewardship becomes defined as how much we give. Nuts.

Stewardship is being responsible with what you have been given.

We live in a society that encourages us to spend money that we do not have. If you do not have the money for xy or z, you can always find some company willing to loan you the money. Usually in under ninety seconds. Go to Kohls and you can open a line of credit with them (and save 10% on your purchase) right at the cash register (I know, I've done this). If easy credit was not enough, they entice us with Zero Interest and Reward Plans.

I felt burdened with all of the debt that I was carrying. How could I be a cheerful giver? I was looking at 10% of my income going to the church while I was making a decision on which creditor to pay? No, we should be teaching our brothers and sisters how to handle money and start spending only what you have and save for that rainy day.

Dave has a pretty good program. And now, I am a very cheerful giver. And not just on Sunday mornings. The greatest financial feeling that I have ever had was giving an anonymous cashiers check to a sister in need.

The borrower is servant to the lender. Proverbs 22:7

Seems like I was not the only one who was disappointed by Jericho being nuked by CBS.

Nuts Online
Posted by Chuck at 9:52 AM No comments:

Jericho was a CBS television show that I stumbled on to at the "Watch Now" web site. It chronicled what happens to the small town of Jericho after nuclear weapons are detonated across America.

As I posted earlier this week, survival movies work for me. But, obviously enough for the show to get renewed.

The season finale was this past week. The town of Jericho was defending itself against a nearby invading town. The war was being fought over farmlands and a salt mine. As the two sides square off, the screen goes black, and gun fire erupts. And then silence. The show is over.

This is my problem with shows. The "Cliff-hanger" finales. Then, when they get canceled, there is never a complete story. Even though 24 is getting thread bare (what ever you do, don't move to Bauer's LA), at least they tell a complete story. It's a cliche born out of the who shot Jr time frame and it needs to stop.

You wanna know how to get us drawn back for next season? Write good stories. Write interesting characters that we can get involved with. Do something different, stray from the formula (think Pulp Fiction or Momento). Just can the cliff-hangers and complete your major story threads by the last show. If I like you, I will be back next year.
Posted by Chuck at 6:39 AM 2 comments: 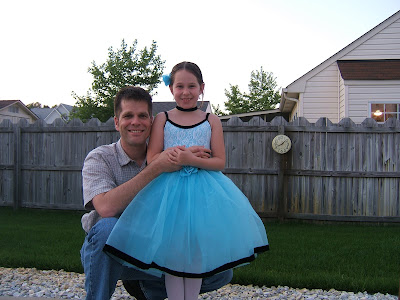 A Turn of Phrase: Jump the Shark

Do you remember on Happy Days when Fonzie jumped the shark? It was the defining moment of the show, but after that it had no where else to go but down.

Of course, I have absolutely no recollection of Happy Days ever being bad. But, what would I know. I was a kid. I thought Horshack was funny.

So, what shows have jumped the Shark for you? On my list is Survivor, American Idol and the Apprentice.

Check out a web site devoted to this subject here.
Posted by Chuck at 6:58 PM No comments:

Ah...finding new stuff. I came across this in my Gmail Settings. Now I can check Gmail with Outlook. Only, make sure that you select the option to download email from "this point forward." A few more minutes and I (hopefully) will be finished.
[edit]
I forgot to say why you should select the "this point forward" option. I downloaded over 700+ "new" email messages from gmail into my Outlook profile before I killed it.
Posted by Chuck at 9:57 AM 2 comments:

Sometimes, in the hustle and flow of life, as I strive to know God, I wonder how I can use my vertical relationship with him to affect my horizontal relationships with others? I see a bumper sticker nearly every day that says "What difference do you make?" and I ask myself the same question, "what difference am I making?"

There are precious few things that will have eternal consequences in this life. But, I know one of them is how we reach out to one lost person whom God is calling. Reaching out to them and telling them the simple gospel of Christ.

But instead, I smile politely and side step the issue, not wishing to offend.
Posted by Chuck at 6:31 AM 10 comments:

Tonight was our first small group since the last one broke up. It was very small. In fact, Cindy and I were the only ones there besides the substitute teacher. We got into an overview of the four old testament covenants (Abraham-ic, Palestinian, Davidic and New Covenant (from Jeremiah, not the last supper). Deep stuff, but, not something you would be applying to your day to day walk.
Posted by Chuck at 8:57 PM No comments:

Where in the world did this year go? I know that I have been very busy at work, but I honestly can not believe that I turn 39 in two weeks. For some reason, 38 was that wake up age for me. I remember my Dad when he was 38 because that was the same year that George Rogers won the Heisman Trophy back in 1980. Rogers wore the number 38 jersey (see...there was a connection).

Regarding my decisions about leading a small group, I decided to not take the group over. I do not think I would ever feel "ready" to lead a group, so that is not my reason. It boiled down to the fact that Cindy and I are the youngest in the group (by 15 years at least). How do I relate life experience with them? They have already been where I am. Instead, we are officially in the "visiting" stage, but we are going to a class that is in our age group.

Big news on the work front (and the cause of me loosing sanity) is that it looks like that my application is going to be localized in several languages world wide. I've never done anything to this scale and, while it does scare me, I am excited about the experience once we get through this.
Posted by Chuck at 6:44 AM 1 comment:
Newer Posts Older Posts Home
Subscribe to: Posts (Atom)