Ok, here we go...
1. What are your five favorite Christmas Songs

2. Five Foods you look forward to at Christmastime

3. Five Favorite Presents of All Time

4. What are your five favorite holiday-themed TV Specials

And...as an added bonus, I give you the Star Wars Holiday Special. Aired only once.

Sometime around midday yesterday, I came to the conclusion that I had the krud that has been passed around the house. No aches, just major congestion. Of course, this could not have happened last week. No, it has to wait until the week when I have two sites that are launching.
Posted by Chuck at 6:41 AM 4 comments: 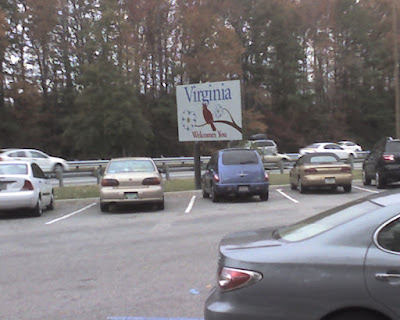 I am now back at the keyboard, so, my post will probably return to their normal, long winded self. But, we made it in one piece without the usual "off route" track through North Carolina. 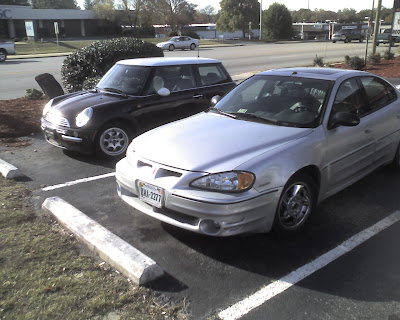 The great SC roadtrip 07 is coming to a close as we are preparing for breakfast and the ride home to VA.

Yesterday's breakfast with Rick and George was a blast. Todd, you were missed. I hope that we can start a new tradition for the saturday after thanksgiving.

Pictured here is Selma (as in Hayek) with the Legendary Jeeves.

The trip to Evans GA was brief, and I had a great visit with my Grandmother Bryan. She is doing remarkably well. In the commons area, I did spy a WII, so I am thinking that late at night the residents get together for some WII sports slam downs.

I really had to feel bad for the Gamecocks. Not only did they loose their fifth game in a row, they lost to their in state rival. The hard part was that the defence looked so much better and the offense was being productive. Hopes of one more game is slim to none.

Overall, a great trip. I hate to see it come to an end. Normally, we are back in Cola around July. Hopefully, next year, I can take a few more extended weekends.
Posted by Chuck at 4:37 PM 1 comment:

After one minute in Yankee Candle, my nose is drunk with a number of conflicting smells. Please honey, just pick something.
Posted by Chuck at 4:37 PM 3 comments:

Back in Cola Town 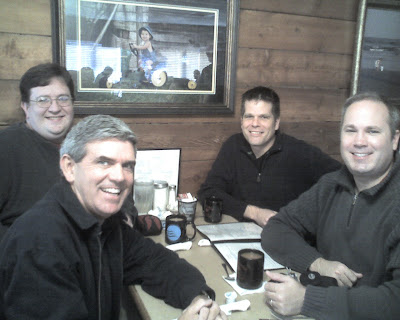 Ahhh. It's great to be back in Columbia. Especially on the Carolina Clemson game weekend. Now, if I can score some Bojangles, this could turn into a perfect weekend.

Tommorrow is going to be great when I meet some of my longtime friends and fellow bloggers for breakfast. Should be a good time. And for those of you who can't make it due to distance, we will drink a coffee for you.
Posted by Chuck at 4:37 PM 2 comments: 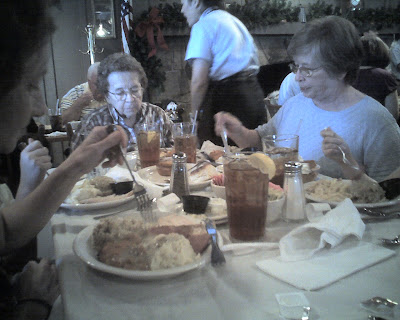 This is a first post from my treo as I am sitting outside of a cracker barrel in myrtle beach, South Carolina. The queue time is about twenty minutes, so I decided to try and crank out a post. The tiny keyboard is proving to be quite the challenge for my overly large thumbs. The trip to CB was rather spontaneous: the desire was to reduce the cooking duties on my grandmama.

The trip down was remarkedly uneventful. I was in a foul mood to start off, and played the role of angry redfaced kid to a tee. Not trying to excuse bad behavior.

I hope that Cindy and I can catch a movie today. There are several that I want to see, but I am not sure what Cindy would think of them. We'll see.
Posted by Chuck at 9:08 AM No comments:

Twas the week before Thanksgiving

Can you honestly believe that next week, the majority of us will be declaring that we ate too much? Personally, I am looking forward to it! Why? Because I will be eating at Grand-mama's House, and she is one good cook.

I look forward to driving down to South Carolina to see her, and each year, I really hope that I get another chance to do so. And my girls love going to see her. They call her house a cottage, but, to me, it has always seemed much bigger. I tell them that her father and brother built that house. I love the idea of watching the Macy's Thanksgiving Day parade more than actually watching it. The kid in me still likes to pull out the adverts from the Sun News to see what toys and gadgets will be sold on Friday. Mom and Dad will arrive before lunch, and Cindy and I "sneak" off in the afternoon to catch a movie down at the beach.

Friday, we leave after lunch to go to Columbia. I am looking forward to having Breakfast with the Boys. I hope this will become an annual tradition with my fellow Spy Hunters/Bloggers Rick, George and Todd (I am sure a plethora of pictures will permeate our respective blogs). That afternoon, we head west on I-20 to Evans Georgia where we will rendezvous with my Grandmother Bryan for a lunch and visit. I wish we had more time to visit my aunts and uncles. Perhaps I just need to schedule one more day. Saturday evening is an optional movie outing, but Sunday is the return to Virginia (heavy traffic and an inevitable detour through NC ~ thank goodness for Tom Tom).

Meet the new member of the family 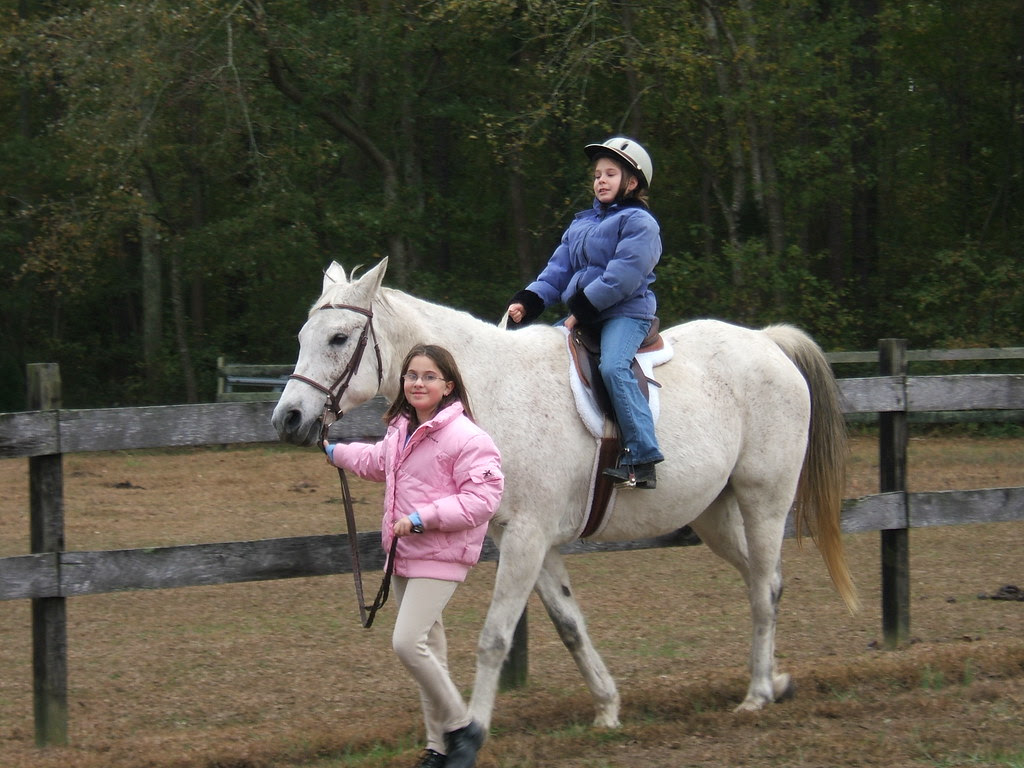 I like this strip PVP (Player vs. Player). This week, the boys have been in training to play the new Halo Game. Even though they had never played a console game, they managed to win.

Steve posted a story about one of our high school friends, who happened to show up in a comment chain over on Fourth Row Center. The comment chain is very funny, and shows the power of Google as they are talking about Martha M. and who shows up? Martha!

Perfectly Brilliant. You have to love this stuff.

But on to my Star Trek Ploy Story.

Steve describes himself as a Star Trek Fan, not a fanatic, but more loyal than most. I describe myself as a Closet Trek Fan. I discovered this when I met some real Trek Fans. In September of 1990, I scored a pair of tickets to a Star Trek Marathon. The only hitch is that the movies were showing in Atlanta (approximately four hours from Columbia). James, my room mate at the time, and I had previously driven out to Augusta, Georgia to catch a couple of flix, but this ploy was going to involve some real mileage.

Once there, we realized that we were both under dressed.

Not to be dissuaded, we made our way to the fourth row, center seats. Upon settling in, we were asked, by a Trekkie sitting behind us, to move. He did not want his view of the bottom edge of the screen obscured. Not all Trek Fans are nice. Jay told him, in kind words, to bugger off.

During Spock's burial scene, a lady sitting next to me began sobbing. By sobbing, I mean big, wet, heavy, snotty sobbing, as if she had really lost someone in her family. Jay and I are overcome with the giggles, and the more we tried to suppress them , the worse they became. I tried to comfort her with the words "He'll be back in two hours," but she was inconsolable.

This marathon was held shortly after Roddenberry died and had been scheduled in preparation of Trek's 25th Anniversary. The highlight of the night was a sneak peak at Star Trek VI: The Undiscovered Country coming out in December. The low point was gutting it through Star Trek V. Looking back on it, we should have planned to spend the night in Atlanta, but we didn't. It was a long drive back to Columbia, a long day, and a successful ploy.

I had come to realize that I was not quite the Star Trek Fan that I thought I was, but merely a Closet Trekkie. 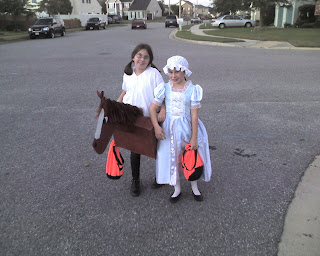 Realizing that I missed the Halloween special, here is a picture of Katie and Megan dressed up as Felicity and Elizabeth: American Girls! Both girls hail from the town of Williamsburg in the Virginia Colony.

Felicity, shown astride her horse Penny, is a Patriot, while Elizabeth's family remains loyal to the crown.
Posted by Chuck at 3:50 PM 3 comments:

James has inspired me. I am boiling my very first batch of P-Nuts.

I live next to the Peanut Capital of Virginia, Suffolk, and I have never taken raw, green peanuts and dropped them into boiling water. This football season, I have been eating them roasted. But the problem with roasted peanuts is the debris that they leave behind (couch, carpet and weekend t-shirts). No, I think boiled would decrease the mess.

And that is why I put a call to my mom today to get an idea of how much salt to use. She likes to use a lot.

This part scares me, and I had to send Cindy out for more when I ran out. So there they are, a package of green peanuts enjoying a simmering bath, while I wait for the Gamecocks to take the field. Hopefully, they will redeem the past two weeks and stomp the Razorbacks.

Home Away From Home 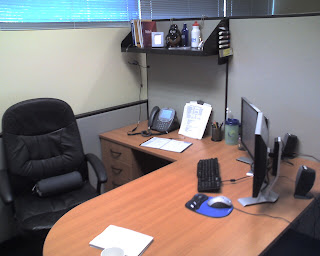