Saturday, I tried to rent a game for my XBox 360 called Test Drive Unlimited. In this game, you purchase a variety of cars and drive them on the Hawaiian Island of Oahu. The makers of the game have mapped out over 1,000 miles of roads to drive. Along the way are various challenges that allow you to rank up in skill, earn cash for cars or credits that can be used to pimp your ride or your look. With the 360 and an Xbox Live account, you will see other players driving about. Occasionally, they may come up to you, flash their headlights and challenge you to street race. Ah, the life of the fast and the furious. Only, Vin Diesal doesn't look as cute as me.

So, I wanted to rent the game and play it for a few weeks. The reality of buying any game is that I tend to play it for a few days and then get busy with what I like to call the real world. Then, I forget about the game. These games are a $60 dollar investment. However, I was denied the rental of the game because, at Blockbuster video, they will not let me rent an Xbox 360 Game unless I have a major credit card. They will not accept Visa Check Cards. Never mind the fact that I could go to Blockbuster Online and open an account with the same card, or Gamefly for that matter. Never mind that I have been a Blockbuster customer with my own account since 1989 and have always paid for any fees that I have incurred. I talked with the Store Manager who, was very nice, could not make an exception. It just so happens that they just had a meeting to discuss this very topic and, under no circumstance where they to make exceptions. The manager wanted to smooth the ouch with some free game rentals (classic xbox, of course) or video rentals. I even called the Blockbuster 1-800 customer service line and was given some of the same information, but, was told that my concern would be forwarded to an area supervisor. I am still waiting by the phone for a call. Not.

I had become determined to get this game. I found a used copy at Game Stop for $35 dollars, and if I traded in three games I no longer played, I could get the game for $6.00 dollars out of pocket. I went home for dinner and to run the purchase by Cindy. I was going to rent the game for $8.00 or buy it for $6.00? It was a no brainer for her, and she gave me the thumbs up. When I took my games to the store, I remembered that I had a Game Stop "Edge" card which gives me an additional 10% to each trade in title, and 10% off any used game purchase. I wound up with $1.51 store credit on the Edge card. That was really cool. 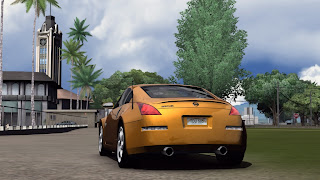 And, the game is a blast also. I cruised all over the island looking for "please wait...loading" but never got one: it is silky smooth. If you are looking for an "open ended" driving game, this one is a lot of fun. Combined with our wireless steering wheel and our MP3s, you can really imagine you are driving on Oahu.

Just a side note, if you do have Xbox Live, you may want to consider disabling the Online Interactions. When I got home from work on Monday, I came in after a terrible online incident. Turns out, Megan ran into another "live" player, who in turn, exacted revenge and ran in to her. Not one to back down, My Toughie tracked the person down and ran back into him. Long story short, my seven year old experienced virtual road rage, and someone out in there in the world totally got owned by a seven year old girl. Megan learned her lesson, because the Hawaii police came along (yes, they have police) and took her to jail. Turns out, she had priors. Also, turns out she did not have enough money to make bail, so she had to spend 30 seconds in the pokey.
Posted by Chuck at 6:32 AM 3 comments:
Labels: Video Games

For years, I have used McAfee for all of my anti-virus needs. I would like to say that it was because they were the name that I felt that I could trust, but, in truth, I believe that it came with one of my computers. Early on, you would by the software, and then be entitled to updates of the Virus Definition files until a new version of the software came along. But, like other AV products, McAfee implemented an annual subscription based model.

But then, they became much more than Anti Virus: they became a "Security Center." If you did not have all of their products, you were shown as having less than perfect condition by their software. That is, if anything, a power lesson in brand loyalty and simple suggestion that you are not safe.

Something deep inside me got mad. Mad that, before 1995, this was not even a business, and now we have to protect our computers just to check our emails. Then, along came AVG.

Currently at version 7.5, you can download and use for free. It is a full feature Anti Virus Software that automatically updates its virus definitions (also free). If you like the product, you can always purchase the commercial version, but, I think I like this version just fine.
Posted by Chuck at 4:46 AM 2 comments:

One of my most favorite Oscar was 1990: It was the last Oscars that I enjoyed with Jay. Airing March 25, 1991, I think it might have been the only show we watched together. Traditionally, we took a copy of the "Beat Berman" entry, selected our choices and put it into an envelope. Once the Oscars was done, we checked our score cards to see how we fared. The next year, I was in Okinawa, and the tradition ended. The Oscars started becoming "message" oriented and I completely lost interest in them, until 2003 (Return of the King).

So, I just found out that my local AMC will be participating in the "Best Picture Showcase" next Saturday, and I have purchased my tickets. I am looking forward to the day. I went back for my hearing test this past monday. I am sorry that I did not post, but, there was no change from the previous week. My doc is scheduling an MRI for me to see if there are any tumors involved. On the plus side, I enjoyed a nice rehearsal and felt good to be gaining some confidence playing tonight.
Posted by Chuck at 9:49 PM No comments:

I went back this morning for another hearing test. It showed what I had been feeling: improvement. There was one sound level that was border line, but everything is heading back up. My doctor called and wants me to keep at 40mg of Prednisone for the next four days before beginning the step-down. And, I have another hearing test next monday. Thanks for the prayers!!
Posted by Chuck at 6:51 PM 1 comment:

I had told Cindy, Saturday night, that I did not think that I wanted to go to church on Sunday. I was worried about the volume of the worship service. But something had changed Sunday morning as we were all sitting at the breakfast table. I was realizing that, for the second week in a row, I had become somewhat unplugged. All this week, I have had the gamut of emotions regarding my hearing and reactions to the medication. What I realized that I needed, right now, was a little noise. I find the hardest part of worship is letting go of the knowledge that there are people around me. To let go, and enter into an audience of one.

Pastor Jim started his series on James. Prior to starting, he shared that he had been having problems with his hearing. He noticed the problem when his cell-phone sounded different in one ear, more so than in the other. From across the sanctuary, Cindy and I immediately locked eyes: that was exactly how I first noticed something wasn't right. I liked how Jim put "Consider it pure joy, my brothers, whenever you face trials of many kinds, because you know that the testing of your faith develops perseverance" into context with what I had been going through. Our faith is not tested in the good times, but, when bad times comes, and the rubber meets the road, our faith is proven. Paul was not asking us to do the impossible, like jump for the moon, but something completely obtainable...to consider the testing of your faith through various means a joy.
Posted by Chuck at 7:07 AM 1 comment:

The United States favors an Iraq that offers its people freedom at home. I categorically reject arguments that this is unattainable due to Iraq's history or its ethnic or sectarian make-up. Iraqis deserve and desire freedom like everyone else. The United States looks forward to a democratically supported regime that would permit us to enter into a dialogue leading to the reintegration of Iraq into normal international life.