I am looking forward to my 42 revolution around the sun. 42 is one of those numbers that, well, make certain geeks snicker: after all, we know it to be the ultimate answer to life, the universe and everything.

Now, if only we knew the question.

The problem is that the body does not quite have the same resiliency as it did, say, 41 years ago. I have some issues with my left hip that adds just a little pain to about anything that involves moving.

I went to my first physical therapy session, an evaluation of what was going on. It always takes me a little while to warm up to someone, but, getting to know someone while they are touching you doesn’t help.

Luckily, I survived with my dignity intact, but with some astute observations made that I was not aware of: my posture is horrible. I always thought I had relatively good posture (didn’t we learn this in marching band?). I suppose sitting in front of a computer 60 – 75% of the day does not help. In my heart of hearts, I know the issue with my hip will heal; I just need to be patient with the process.

What do I want for my birthday? Simple – A homemade sheet cake that has the words “Don’t Panic” written in big, friendly letters.

That, and maybe a Pan-Galactic Gargle Blaster.

On May 8th, Cindy, Katie and Megan will be out for the weekend, so I will have the ranch all to myself. What to do?

I have always wanted to do a 24N24 marathon – watch one season of 24 in a day. I would choose a day, and then begin watching a season and start the marathon at the same time that the show begins.

Using my trusty IMDB, the seasons of 24 start in the following hours:

I think Day 8 is safely out, as it is the current season and will not be completed until May 24th. And because of the nature of the Marathon, I think I will rule out Day 3.

What scares me about the ones that are starting after 6:00 AM is going through the night without nodding off and falling asleep. I think that I would have enough momentum to go from 12:00 AM to 6:00 AM, and the 9:00 PM back to 12:00 AM seems doable.

Since the actual viewing time is 16 hours, I’ve broken that down into four blocks. I worked out the start and finish of the season matches up with the show and placed in 8 hours worth of breaks (Food, get out of the house, cat nap, etc.)

So, here is my initial schedule: 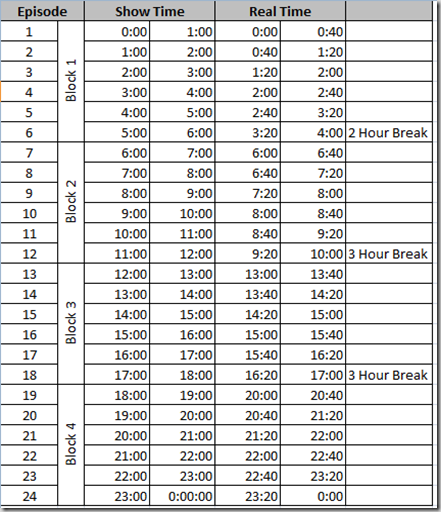 Again, I am taking anyone who wishes to sponsor me with caffeine products (coffee, five hour energy) and if you want to drop by and watch a block or two (or three or four) feel free!!

This morning, I woke up at 6:30. Cindy and Katie were getting ready to head off to Suffolk with the Ponies and Megan was still fast asleep.

Time to get up.

I went downstairs and made some coffee and remembered what had come from Amazon the day before: my blue ray version of Lord of the Rings. Not the Peter Jackson version, but the Ralph Bakshi animated film.

For me, this film holds a special place. I discovered LOTR in high school, and this film was something that I longed to see, but, it mostly showed at midnight movies. By today’s standards, the animation is not clean, but, put it in the context of 1978, the animation was absolutely fluid thanks to roto-scoping.

Coming in just over two hours, the film ends at roughly the same point as Jackson’s Two Towers. There was never a second film. I wonder if one was ever seriously planned?

The jewel of this disc, however, is the documentary. It is really neat to get into the head of an artist who was trying to do something that we take for granted today – make animation for adults.

One quote that Bakshi made was

This speaks to me, as I am realizing how much I want to truly understand and create via computer programming. It is almost like I had been in a fog for years where I was focused on the delivery, but not the craft. I had fallen into taking short cuts and bad practices and had done it so often that the end justified the means.

Over a year ago, I stepped away from a management gig because I wanted to program. But, I did not want to write software in the same way that I was previously. I challenged myself to learn and grow. You know what? There are a lot of talented people out there who share much of what they know and who can teach you new ways of doing things.

You have to just invest the time. Find your passion, and persevere! Don’t ask to be taught, go and learn!

As J.P would say: “Develop with Passion!”