Today is Martin Luther King Day, 2011. I have the day off, but after waking up around 5, I knew that I would not be sleeping in today. There had been a couple of posting ideas brewing in my head last week so, I’ll try and share one of them today and another later.

I have several close friends who have gone through some really difficult times. Because I love them, it hurts to see them go through this. I want to say something, anything, but I feel awkward so I often remain quiet and simply listen. I really have no idea how it feels for them right now. But, I have had two dark periods in my life so, even though I do not know how they feel, I am familiar with how suffering hurts.

I think that Paul, the author of the verse, is encouraging us to look beyond our current state to what comes after. Because even though right now it is hurting both physically and mentally, God will redeem this by producing within us something that otherwise would not have been possible: a new character – a new us.

This would not be the path I would chose. But this does not mean that God cannot redeem this path of suffering, hurt and loss and exchange the ashes for beauty.

This gives me hope.

“We must accept finite disappointment, but we must never lose infinite hope" – Dr. Martin Luther King.

“We must reject the idea that every time a law’s broken, society is guilty rather than the lawbreaker. It is time to restore the American precept that each individual is accountable for his actions.”

Will the real Jesus please stand up?

“We have come so far from reflecting the rebel Jesus in our art and cultural engagement that we do not recognize Him when He surfaces. I still wrestle with the fact that Jesus hung out with prostitutes not simply to tell them what they were doing wrong, but to love them where they were. He was in the world, and His agenda was to love. He was not looking for reasons to be offended. He was not looking for reasons to stay home, safely out of harm’s way. We weren’t set apart in order to live apart. We were called God’s own so we could confidently go into the world.”

“It doesn’t take a majority to prevail, but rather a tireless minority keen to set brushfires in the minds of their neighbors” 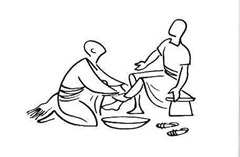 Last month I was going to lunch when a question formulated in my mind: Do I really love God more than my wife and two daughters?
Since it was only me in the car, I was truthful – no. After I realized that I had not been stuck by lightning, there was a sense of “release.” For once, I was being honest with myself (and with all of you). God already knew the answer prior to asking.
This did, however, present an interesting problem, because all of a sudden I could see the wall that had been separating me from God. It was as if He was asking “I bet you didn’t see that before?”
The first sermon of the year hit me square in the chest – it was from Luke 14:26 – “If anyone comes to me and does not hate his own father and mother and wife and children and brothers and sisters, yes, and even his own life, he cannot be my disciple.” Those are red-letter words, which means this was Christ speaking to those in the large crowds who were following him. Maybe he was saying it to thin them out a bit. In the context, hate/love is a literal device to contrast two extremes, not a commandment.
The timing of this message was not coincidental.
In closing, I have noticed a few of my friends choosing words for their new year. Not a resolution, but a word that will guide and direct their choices and behaviors throughout the year. I have found my word. For 2011, I choose “Disciple.”
Posted by Chuck at 6:38 AM 3 comments:

Cindy asked if I had experienced any of the post holiday “let down.” She was asking this as we brought the boxes down from the attic, took down and repackaged the decorations.

I realized that just two weeks ago was what I remember was a “day of business.” A day that was filled with violin recital, a birthday party, a jazz gig, a cable installation and looking at lights. The week before was Christmas and we were on the cusp of a major snow fall. All of last week was filled with family guest and parties. I was off last week and I had successfully achieved a state of “what day is it anyways” mentality.

Now, with guest are gone and decorations removed, routine is about to reinsert itself back into life. Today I think I do have just a twinge of the post season blues, but there is also nervous anticipation about what 2011 will bring.

I feel ready to jump back into the work fray. I am purposefully intending to bring a better work/life balance this year. Also, I propose to better my craft. Who knows where this will lead?

Even though the Gamecocks did not pull out a victory on New Year Eve’s Chic-Fil-a Bowl, we had a great evening shared with friends and family.

Both girls went to a church lock-in and had a blast. Although I would have loved to sleep-in this morning, I am so appreciative of the many chaperones who helped make this event possible.

The lock-in makes for a new years tradition: instead of black eyed peas and collards, we lay low and sleep.

Posted by Chuck at 8:19 AM No comments:
Newer Posts Older Posts Home
Subscribe to: Posts (Atom)