Aint it Cool News posted their review of The Nativity. The movie was panned, commenting that most Christian movies are generally bad. In the past few years, I have seen several "Christian" films including Left Behind, The Passion of the Christ, End of the Spear, Luther and most recently Facing the Giants. Of those films, I thought that Left Behind was pretty bad, Passion of the Christ overrated. However, Luther, End of the Spear and Facing the Giants were very enjoyable, and had very real applications to my Christian walk.

End of the Spear showed me a picture of what it is like to truly forgive another person. We speak about how God forgives us but when it comes to us forgiving other people, we tend to not model our God. Forgiveness isn't always easy, and End of the Spear uses an extreme situation to make this point. Is the acting the best? No. Is the cinematography academy award winning? No, but the story is fantastic.

Luther was incredible because I had never really connected all of the dots to how important translating the Bible from Latin to a common tongue (in this case, German) was in Church History.

Facing the Giants is another movie that made it to the local cineplex, but still felt like one of the New Line pictures from the eighties. However, like Spear, the story is honest. It also takes an extreme situation and shows God at work. Sure, on one hand it is convenient that everything works out ok (this doesn't happen too much for me), but it drives home the point: nothing is too big for God. Also, the film makes heavy use of non-actors. Sometimes this is painfully obvious, but once I got past that, I really believed them.

Finally, Passion of the Christ. Most of the "Talk Backers" on Aint it Cool News site held this film as the "Gold Standard" in "Christian" movie making. Others called it a snuff film. I thought that, while it contained some very powerful images, and made the crucifixion real, it was overrated. I have tried to watch it again, but have never made it through.

So, if you are so inclined to, throw these movies on your Netflix queue. Pop some corn, get the beverage of your choice and enjoy.

For some reason, lately, I have been waking up around four in the morning. I wonder if, perhaps, I am in a suspense movie wherein the main character wakes up at the same time just prior to some horrific event.

Or, it could be LJ's fault for getting me hooked onto "A Song of Ice and Fire," George R. R. Martin's Epic fantasy that when all is said and done will span seven books. I have just finished "A Game of Thrones" and am almost two hundred pages into the second. Personally, I think LJ knew I needed something other than .NET periodicals to read in my free time, and I appreciate that. I find myself grabbing the book to find out what happens next.

Maybe, my restlessness is caused by worries at work. As my company has grown, I have been given more "manager-like" duties. I feel responsible for more projects and employees and consultants than I ever have before (besides my days Assistant Managing at the Ye Olde Blockbuster). Even though this may be cliche, the hardest part is delegating. I never understood why it would be so hard until now: it's like admitting you can not do a task, not because it is hard, but, because you no longer have as much time to devote to that task.

However, I think that the reason I woke up so early this morning was due to the shipment from Coffee Whiz that I received yesterday. My shipment included Mocha Java, Winter Carnival, Perfectly Pumpkin, German Chocolate Cake and Holiday Blend. Last night, I had a cup of Winter Carnival, perhaps not a good idea. I have just finished a cup of German Chocolate Cake and am enjoying the slight aftertaste of coconut. I am spoiling myself with the Keuring K-cup system. 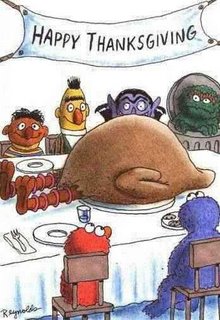 Well, after some of the more serious topic post of late, it is time to turn onto one of my favorite holidays of the year: Thanksgiving. For the past six years, the Gang and I hop into the car and travel down to spend Wednesday night and Thanksgiving Day with my Grandmother Morton in Myrtle Beach, SC. My Grandmother's house is the same house that her dad and brothers built way back in 19**. She will never tell me the exact date. Hmm. Mom and Dad join us on the big day. Between Parades, Football, Eating and Uno marathons, Cindy and I let our belts out a notch and go catch a movie down in Myrtle Beach. I think this year, I might give up and just wear sweats. I would like to go see the new Bond flick, but Cindy is leading more towards "Stranger than Fiction." On Friday, we cross over to Columbia and on Saturday we take a day trip over to Evans Georgia to visit my Grandmother Bryan. Hopefully, I will be able to catch some of the Carolina - Clemson game. It would be great to close the season with a win. We have come soooo close against big teams. We need to win this one. Finally, on Sunday, we repack the car and head back to Chesapeake.
Posted by Chuck at 6:54 PM 4 comments:

I was asked my opinion about a pastor's secret life which had recently been exposed. I was not familiar with all of the details, but we tossed the topic back and fourth. The hardest question that we stumbled into was: does someone choose to be homosexual, or is it simply biological, perhaps even in the same manner that a person is heterosexual? My reflexive answer was "it's a choice," but something about that answer seemed too quick, too easy and maybe too patented. The real question should have been "does God consider homosexuality sinful?"

This question has to be approached with some care. Because if we were to agree that God views homosexuality as sinful, we then have to examine our own lives. Have we become comfortable with any habitual sin? Would parting with it be too hard? Does God have different categories of sin like a McDonald's value meal (small, medium, large and super size)? If so, then my sin definitely is not super sized! Perhaps we have reasoned that we can continue in our sin because God has promised to always forgive a Christian's sin (1 Jo 1:9; Ro 6:1)? Maybe we deceive ourselves into thinking that we simply just do not sin because we have Christ (1 Jo 1:8).

Shining the lights on others is easy. Focusing that same light back on us...well, perhaps not so much.
Posted by Chuck at 7:53 AM 2 comments:

I have to admit, that I find it difficult to keep the Rapture in the fore front of my mind. Christ spoke of his return some 2000 years ago, and we have been anticipating it ever since. I often feel as though I will be one of the "dead in Christ" at his return and will be called up to meet him in the air. I do not pray, like John, for him to come quickly. And, to tip my hat over to the Good Coffee site, my attitude reflects the way that I relate to those who are without Christ. If I had been given a date and a time, how much harder would I try? How fervent would my prayers be for my "lost" friends!

Has Anyone Seen My Netflix Disc? 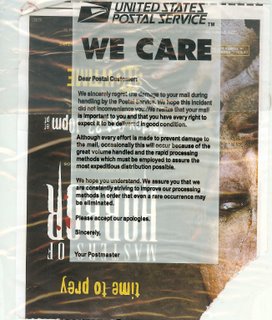 I was really anticipating Disc 6 of the first season of House. Imagine my surprise when all that arrived in a hermetically sealed bag was the outer flap that you rip off and discard.
Posted by Chuck at 5:43 PM 2 comments:
Newer Posts Older Posts Home
Subscribe to: Posts (Atom)