Last night I had to exercise one of my duties and give someone the opportunity to find a new career path. It had been coming, it was properly documented, the employee had several reprimands on file. But still, when it came right down to it, it was not as easy as Trump makes it look. My boss gave me one piece of advice: remove any sharp objects from reach. Not sure if he was actually serious. What really hit me, was later on as I was hanging out with my girls, was that the former employee was now at home with his family.

This is probably on everyone's mind: but, I am not so sure that going into debt 700 billion or more is the right answer. Seems like my financial guy doesn't either. And, in the two years that I have been following Dave Ramsey, seems like he is truly pissed.

Could this work instead of going deeper into debt?
Posted by Chuck at 5:32 PM 1 comment:

Just looking at my title for the blog. I have absolutely no idea how I landed on that. Perhaps it hints at my creative side. Perhaps it shines a bit of light on my bad habits. But, however I cam across it, today was neither creative or loafing. I started at eight this morning with the aerator. My neighbor and I rented one of those beast that, well, it can work you over if you are not careful. Luckily I was ready for it this year and had my yard done in about an hour. Still having most of the morning to kill, I decided today was the day that I drain the pool of some of its water and place the cover on it. And, now that I know how to use the fulcrum bar, I do not endanger any part of my anatomy.

What's left for the day? Oceana Naval Air Station is having its annual air show. Its a bit overcast, so I am not sure if we will be able to see the Blue Angels, but, I would like to go out to see the static displays. Hopefully, an F-15 will be on board. I would love to show it off to the girls.

And, if you really want to loaf in front of the computer, check out IMDB: they now have full-length movies and TV shows to stream to your desktop.

You know it has been a bad day with homeschool when...

George's comment spurred me to write this. Maybe it will turn into something more or less regular.

You know it has been a bad day with homeschool when you come home late, and the books are still on the table.

This past Saturday, Katie wanted to earn some extra cash to purchase a webkin. Apparently, she spied one of the plush toys at a local vendor, and, it was one that was a rare item. The rocks that lined our pool's patio needed weeding, so Cindy placed out equally spaced X in chalk. Each X represented a dollar.

Did I say it as hot on Saturday? It was.

I also had my chores. I finished our small group lesson and went out to cut the grass extra short because we are getting ready to overseed the lawn and aerate it next weekend. In less than two hours, I had four 32 gallon bags filled and both yards done. Katie had moaned about doing one X. She asked if I had any other chores, she called Cindy to see if she could do something else. The truth of the matter was, between the heat and the spiders, it was a tough job. After the last complaint, I stood before her, tired already from my job, and I laid into her. Perhaps a bit rougher than I had meant, but, I wanted the point to be clear: sometimes we have to do things that aren't fun and we need to see the job through.

I have seen grown ups on the job over the years who never learned this lesson.

She cried, and I left her there. When she did finish, and we paid her the dollar, she gave it back to us and went upstairs. I took it back to her, put my arm around her and told her that she really earned this dollar. I did not like the attitude that she had through out the process, but, she worked hard for this one. After I had cleaned up, I took her out to 7-11 for a Slurpee. I started to watch some football. At some point, I looked out back, and she was right where she left off, pulling more weeds. This time no complaining and just concentrating on finishing the job in no time at all.

She learned the lesson.

If you are looking for a new editor for you blogging needs, I have been using Zoundary Raven. I have used Zoundary before, and went to look for an update to install and instead downloaded and installed the Raven beta. Recently, I have been simply using the blog template in Word 2007, but, Raven allows you to configure your Picassa account so that it makes uploading photographs to your blog easy. Also, it supports multiple blog sites in case you are hosting a blog for your friends, and another for your movie reviews. 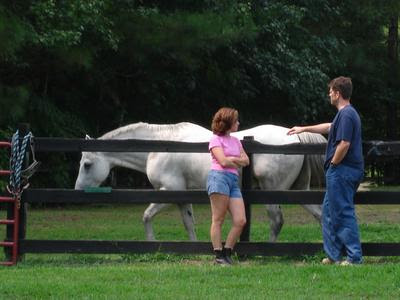 Last week, I visited our new leased horse. A nice family is leasing us a pony, but the sweetness of the deal is that it is $15.00 per ride with a max cap of $125. So, it is not really a lease in the sense of the word, but the arrangement is very fair. Mom and Dad were with us, so they took a bunch of photos and they snapped this casual picture of Cindy and me outside of Mooney's paddock.

Mooney is not the pony that we are leasing. That would be Cocoa, seen below. Katie has been riding since she was six. For much of the time, she was riding Hunter Seat style and was learning some very good skills. However, the type of horses and ponies that she was riding were very, very expensive. Also, Katie was developing some very good fundamentals in both riding and jumping, but, she was not getting much in the way of horseman ship. The route that we have taken has helped her to become independant in tacking the horse and proper care. Last April, she was awarded her D2 rating in the US Pony Club. Hopefully, but the end of the year, we will have saved enough to buy a used truck that we can take our pony to various events. 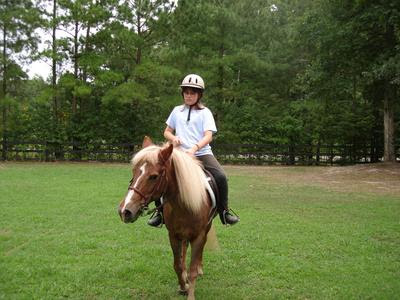 I do not write much about my sister or my brother. Both committed suicide during their teen years, and twenty six years later it is still difficult to even talk about. Recently, while in Charleston, I had connected via Facebook with my sister's best friend. Her note hit me like a bolt, and I stood next to the Market Place, holding my friend's, Ron, Ipod Touch, with a stunned look on my face, and tears in my eyes.

It was an opportunity to tell Ron.

For the people that I do tell, I know it is difficult for them to know what to say. And it is here that I usually try to steer the topic to something else. However, this time, it was different. I had been doing calculations in my head to determine how old my mom and dad were. They were thirty-nine when my sister died.

I am now older than my parents when their first child died. With two daughters of my own, I can not even comprehend how they survived one, let alone two. My brother died six years later.

It was a hard lot that they were dealt. Mom and Dad are the strongest people that I know.

I love you both.

Just wanted to welcome my daughter Katie to the wacky world of blogging. She set this up with some help from mom to talk about her love for horses and other fun things.
Barn Girls Just Want to Have Fun
So, where did the Cyndi Lauper reference come from??
Posted by Chuck at 5:51 PM No comments:

If Memorial Day marks the start of summer (unofficially), then Labor Day heralds the end of it. Tomorrow, the kids start school and sleeping in will be reserved for Saturdays. That goes for mom and dad, too. We have our alarms already primed for "o dark early." Routines will need to be adjusted, and early to bed habits formed.

Labor Day is such a bitter sweet holiday.