Back in the 80's, Robert Palmer had a song, Addicted to Love. Some of from the movie theater, during those heady days of Tetris, altered the refrain of the song to make "Might as well face it, you're addicted to Tetris." Good Times.

Today, I am addicted to Smallville. Last night, I had the last disc from Netflix of Season 7. I am not sure how the writers strike affected the season other than it was two less episodes than usual.

Season 7 had many of what I call "mythos points" that we know have to occur prior to Clark Kent taking the mantel of Superman. My absolute favorite was an episode where Lex killed his father. Not only did he kill his father, but he killed the last vestige of any goodness that he had inside him. What was clever was that his goodness was represented by him as a boy, before the meteor storm and him losing his hair. Lex grabs the boy, drags him through his mansion to a fire place and pushes him in.

In the same episode, Clark and Lex have the "all I wanted was to be your friend but you pushed me away" talk. It solidified that their friendship was completely irreconcilable.

Seven ends with Lex gaining control of a Kryptonian artifact that will give him control over Clark, and a well placed cliff hanger.

Wanting to see how it ended, I was hoping that the CW web site would still have all of Season 8's episodes up. Unfortunately, they appear to only carry a few at a time. I turned to another source: bit torrent.

I have been downloading several episodes from Season 8 trying to get caught up. The season opener was pretty good, but the next one turned into the Meteor Freak of the Week (MFOW). Call it Superman 90210 or just a simple guilty pleasure, I am pretty much addicted to the show.

I have woken up this morning in my room at my parent's house. What a neat feeling this is. For my friends who still live in SC, especially Columbia, it probably would not make sense to go and spend the night at your parent's house when you live so close by. It is truly a treat.

This year, we deviate from the typical trip itinerary. Usually, we go to my Grandmother Morton's house near Conway. It is a house built by her father and brother and sits right off of Highway 90. Dad drove to her house yesterday and brought her to Columbia. In some ways, it will be better, but I will miss going to her place. The kids love playing there, and call it "GG's Cottage."

Here are some of the things that I am truly thankful for:

Since today is Thanksgiving, take a moment to write out what you are thankful for. Silly, serious, it is all good. But, just take time to be thankful. And, uh, pass the turkey.

About that Star Trek Trailer

Head out to AICN and download the trailer. There is a little Goodness at the end that was not there before. Happy Thanksgiving!

I am so excited about having this week off. Five days in a row! And, one of those day is a sanctioned eating day! Nirvana, pure joy. There are other things that I am getting excited about, but, I will save those for later: you know, once the grits have thickened in the pot a bit more.

Here is my fear about this week: that I blow it. I have all this time to do something, and that I ultimately do nothing. Sure, we need a vacation from our place of employment. But do I need to be idle? Cindy just said no.

I am going to post this to the blog, and then go exercise. If I don't do it first thing today, it most likely will not get done.

This is an open weekend for the Gamecocks. For me, that means that my blood pressure should remain normal. After last weekend's "game," I think the whole Gamecock nation needs a weekend off. I hope this means big trouble for the Tigers next weekend.

If I cannot watch Gamecock football, then I play them on EA Sport's NCAA 09. Currently, I am playing the Dynasty mode. Let me tell you, in my personal Gamecock Nation, Chris Smelley is a quarterback stud come his senior year. And Stephen Garcia through over 500+ yards in his final bowl appearance.

My wife, Cindy, made a quip: maybe they should make you the coach. Well, I have learned that Guitar Hero does not make you a real guitar played (believe me, I tried...Strings are so lame...give me buttons any day). So I know that playing NCAA does not make someone a real coach.

But, that was not what she meant. She meant I was looking like a coach. I was wearing my Gamecock hat, had my Large Headphones with a mike. She was waiting for me to throw both of them. All I was missing, she said, was a smirk that doesn't go away and a terrible shirt with horizontal lines.

Ever since I switched to Google Reader, I rarely directly visit blogs. It makes it convenient to go through a large cross section of post in one convenient location.

I have used other readers, but have found myself always drawn back to the Google Reader. Where ever I have Internet access, I can get to my reader.

Another feature that I like is the Friend's Shared Items Feature. Rick is a good "Google Reader" Citizen, because he shares many articles that he has caught his interest. So much so, I count it an Honor when he "shares" on of my posts.

Came across something interesting in his shares:

If that doesn't pique your interest, head over to Greg Boyd's site.

many Christians have tragically allowed their patriotism to co-opt their faith. They have allowed their American citizenship to take priority over their Kingdom citizenship -- despite the New Testament's instruction for disciples to consider themselves "foreigners" and "exiles" wherever they happen to live (Heb. 11:13; I Pet 1:17, 2:11) and to consider their real citizenship "in heaven" (Phil 3:20). Many American Christians seem to want a Jesus who will defend their country and hate their national enemies as much as they do.

Something is not quite right here (I really wanted to say Quiet Riot).

This story at the NY Times show that, in spite of the miserable sales last October, sales of Video Games remained vibrant.

That's right. While we are witnessing our Government taking over various industries, I can rest assured that Gaming will not become socialized (federalized). Whatever.

John Williams is the Man

Really, this thing had me in stitches once they (he) got to Jaws!

The Day after the Election 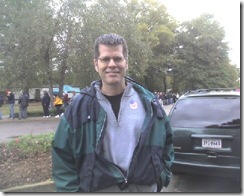 I posted several photographs on my Facebook account that I took while standing in the line yesterday. Cindy and I got up a little after five, and were in line about ten minutes till six. It was dark. It was raining.

As day grew lighter, I could see how far the line stretched ahead of me. How it wrapped around in the parking lot in a serpentine fashion. Strangely, it reminded me of the queues and Bush Gardens (45 minutes from this spot). But this is not a ride, it was one of the core actions where we, the people, participate.

My candidate did not win yesterday, and my adopted state turned from red to blue. I am not going to carry sour grapes over this, and I hope to see in Obama what so many of my friends and neighbors have seen in him.

But, what I was reminded of when I woke this morning to hear the news was that picture in my mind of all those people in line yesterday. There was not a coup, there was not a guerilla leader coming from the mountains taking over a government by force of arms.

There was a line.

A line of cold Americans standing under umbrellas in the rain and the dark. Waiting for their turn to vote.

Posted by Chuck at 7:01 AM No comments:
Newer Posts Older Posts Home
Subscribe to: Posts (Atom)